2,000 Miles on the Felt Sporte with Shimano Steps

It is a very good bicycle and takes the strain of the long hills and routes that were previously avoided.

With a few modifications from the standard, I have the setup just like I wanted.

The changes that were made:


For Touring bike the things that are missing:
- The front fork does not have mounts for extra bags or water bottles.  With only one water bottle mount, it is necessary to carry additional water in the pannier or strapped to the rear rack.
- I would prefer mechanical brakes and not hydraulic brakes for easy repair.  The hydraulic brakes work fine, but hard to do any needed repairs on the road.
- I would like to have an additional battery mount to reduce the 'range anxiety.'
- a USB connection to the battery would be nice to be able to charge a cell phone and/or accessories.
- Spare spoke holder (instead of having to tape a couple of spare spokes to the chainstay).

Still waiting for:
- Better range and smaller batteries
- Smaller less weight and faster battery charger
- built in battery changer so a large charger does not need to be carried in a bag or pannier.
- some battery size options for the additional batteries for touring.  A smaller weight and size battery that would give 10-20 miles of riding would be great to have while touring.
- Solar charge battery option that would charge a second battery while riding.  Great for touring.

Shimano STEPs System:
The Steps system is easy to use, not much noise and provides an "okay" range.   In hilly areas, I was able to travel about 40 miles mostly in ECO mode, switching to HIGH on the steeper grades.  The increase in speed over my non-E bike is about 4 miles an hour... which allows distances to be travelled to be greater.

I have not have the STEPs System updated since I purchased the bicycle a year ago.  I probably need to have the Local Bike Shop do that.  I takes a specific Shimano part to do the update.

Developing Issue with the Shimano Display unit:
Starting at about 1,900 miles on the Shimano STEPs system, The display went blank, turned off for no apparent reason.  The Battery light remained on, and the lights (front and rear) remained on.  Depressing the on - off button on the battery did not resolve the issue.  What did resolve the issue was to remove the display from the display mount, then putting it back into the mount.  This has happen three times in the past 100 miles.   Each time, removing the display, then re-mounting it resolved the issue.  When it happened the third time, I removed and re-mounted the display while still riding and this resolved the issue.  I am not sure what the cause is.  Perhaps a wiring issue shorting out the display, faulty contacts on the display and/or mount.  I will continue to watch... but at least if it fails, the bicycle still can be pedalled without assist... just a little be slower.

1,400 miles on the Felt Sport-E 95s in the past few months
and I am generally impressed with it. 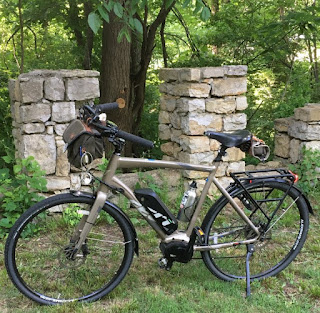 The modifications that were made:

Jones H-Bar -
This was done to give an upright riding position with more hand position options
for long distance touring.
These Handlebars are awesome.
H-Bar 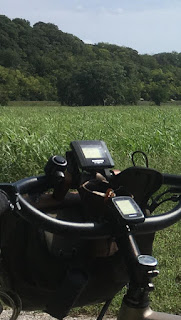 Stem -
This was done to give a more secure handlebar setting and also allow for the StemCaptain Thermometer
(gotta know the temperature and if you are
looking for an easy addition/function to add to a bike this is perfect- great holiday gift! ).

Pedals -
Added RockBros pedals replacing the standard slippery pedals.
This was a change from the clipless that I have been using on my other bicycles
(LHT & Fargo) for years.
But with this bike it is working out well.

Saddle -
The standard saddle was fine, but I added the Brooks Saddle that I am very
comfortable with.

Accessories -
all of the touring items that I have used before, work fine with the Felt.
Acorn handlebar and saddle bags, Garmin, Ortlieb Back-Roller Classic Panniers

It has worked out well so far as a Touring Bike.
It handles the load well but does lack the front fork
braze-ons, and other braze-ons like rack mounts to water bottle cage
bosses to spare spoke holders that I really use on my Surly Long Haul Trucker.
(I was hoping that Surly would make a frame/complete bike that supported
the Shimano Steps system. I contacted them and they responded asking questions
about usage and desired frame... so maybe someday we might see a Surly E-Bike
--     maybe the Surly E-Calypso or Surly E-Trucker) 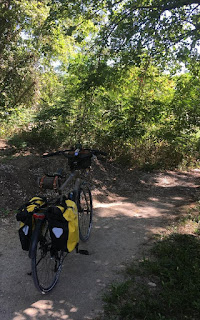 Spoke issues:
Within the 1st 250 miles, a rear wheel spoke broke.
I was able to tape it up, and ride home.
I got a replacement spoke, and replaced it.

At about 350 miles, another spoke broke, I bought
a few replacements, replaced the spoke, taped the
others to the rack just in case.

at about 750 miles, another spoke broke, I replaced it,
and knew the next spoke break would indicate the
need for a wheel rebuild.

at 1,250 miles, another spoke broke.   I had the LBS
rebuild the wheel.  They indicated that factory wheel
builds are not always the best.  Replaced all the rear
wheel spokes and spoke nipples with quality replacements.

The Steps Electric assist is simply just great.  You have the fingertip option of
how much assist is needed.
OFF -  ECO - NORMAL - HIGH 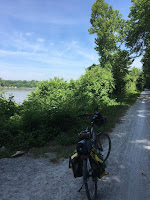 Averaging about 14 mph, I was able to complete
a 65 mile stretch with the battery still having
power and the indicator showing I had 10 miles
of assist in ECO mode.

For my touring, this would be a reasonably
good day, then I would need to charge up
the battery.

The E-Bike Advantage:
For me, the advantage of an e-bike is the options that it opens up for more
advanced age riders.

Noise Level- You can hear the motor and each level of assist is a bit louder...
but not really too loud, as other riders say they are not hearing it when
I ride with them.

With the Shimano Steps system, the assist stops at 20 mph.
For me that is plenty fast for touring and running errands.  It helps letting
me keep up with younger riders where before I would not, or they would
need to slow down me - not good.  Basically, it keeps you out there
riding more, enjoying the outdoors, biking for errands, staying active
and off the couch and out of the car.

It is the hills that the Shimano Steps system really helps.
The hills that often are a challenge, and get the heart rate too high are
now manageable with an e-bike.  It is okay to taking routes that over time
were often avoided.  You do not get the same "workout", you are not
covered with sweat, and too tired to move at the end of the ride, but you
do indeed get a workout. And you control the assist level.  Bottom line,
the terrain is no longer the major factor in planning rides.
It is like going back a few years in time...


Now the major factor is "where can I plug this in to recharge the battery"
after about 60 miles. If only we didn't have to take the Battery Charger
with us on the tours.  Longer battery life and an easier way to charge
will be the future improvements. 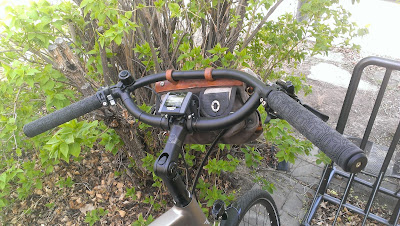 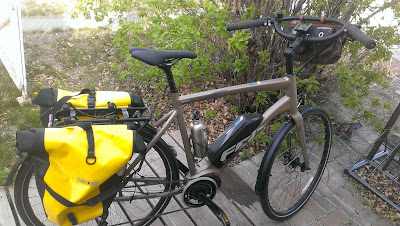 The Testing and Evaluation has began ! 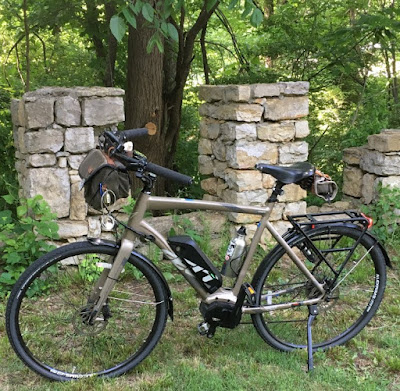 My new Felt Sporte 95 S E-Bike for Touring is being built and will be tested.

The new bike will be built up from the standard Felt Sporte 95 S with the
optional rack, fenders and battery powers lights.  The Geometry is similar
to the LHT.  But the flat bar would not always provide the needed hand
positions for long touring and an more upright position that I have
become accustom to.

I talked with Jeff Jones about the H-Bar options for me based on the bike
and my experience with touring and riding positions.   Jeff is really
knowledgeable and knows the bicycle industry.

Jeff guided me to the Jones SG 2.5 Aluminum Loop H-Bar.

This bar hopefully will provide the touring upright position with multiple
hand positions, can use the standard brake and shifters that come with the
Felt Bike .... and plenty of room for the Shimano Steps Computer and any
other accessory.   Many touring bikes are now going with the Jones H-Bar
and I am excited to try them.

I will be able to compare with the Salsa Woodchipper drop bar that I have
on the Long Haul Trucker and the Salsa Fargo.


We will see how this bike does for touring.