Sixty here I come ! on the Katy Trail ! 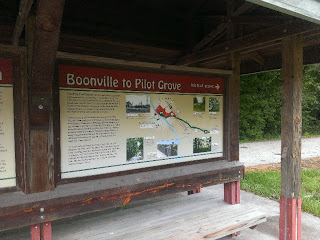 The goal of the day was to ride my age in miles, by myself, on my birthday, on the Katy Trail !.   A good way to start the next decade.   Time to reflect on the past. 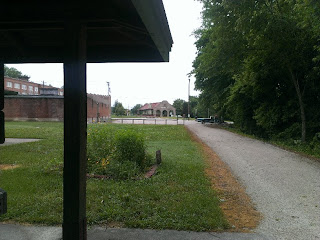 I left from Boonville, MO at the trail head....  It was a bit damp... and the road surface was wet. 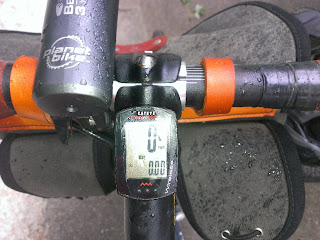 The odometer was reading zero !
The dampness of the trail was apparent. 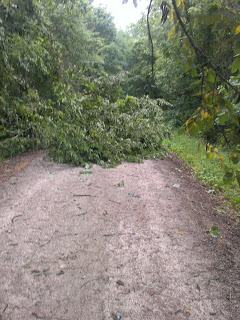 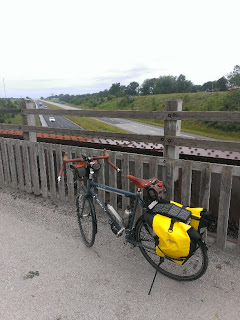 I rode over the Interstate Highway and stopped to take a picture.  I thought it was a perfect metaphor of how .... some people go faster than others.... 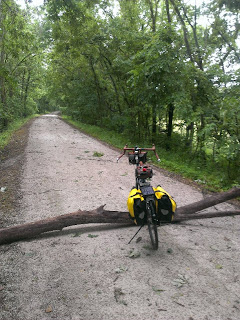 As with life... there is always "another obstacle" to overcome, though some are easier to overcome than others.   I encountered a number of fallen trees and branches.  You always need to take care overcoming the obstacle so you do not create more issues.

The smaller branches needed to be avoided when riding as they had a tendency to get in the spokes or flip up and cut my legs.  After the recent storm, there were a lot of branches down. 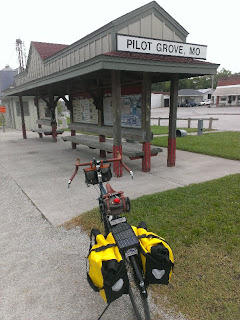 First Stop, Pilot Grove:
As with life, the first 12 years/miles went by fast... and were fun.  Even though it was a bit of an uphill climb, it was hardly noticed.  oh if life would be that easy and fun.   The scenery is so beautiful on this stretch. And the birds..... they were everywhere and singing great songs. 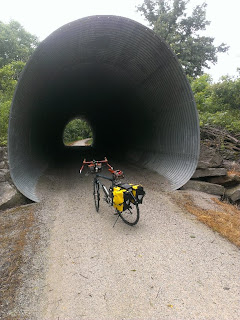 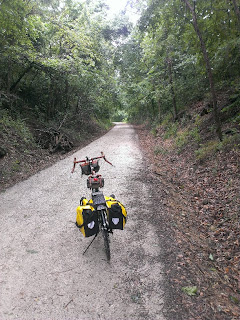 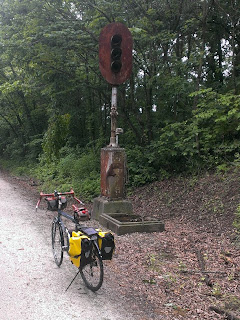 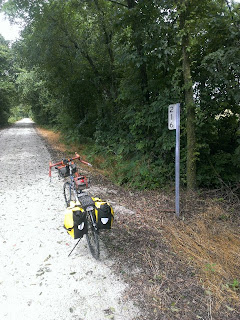 and the experiences along the way. 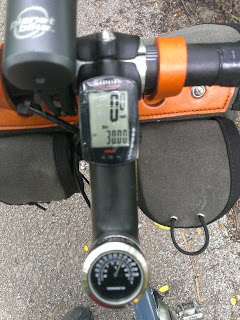 On this journey, it was an 'out and back'  so I needed to decide when to turnaround.    I felt good,  but I was hungry.   If I kept going, in 6 miles (about 1/2 hour) I could eat, rest, then start the journey back. But that would put me at plus 70 miles for the day.    If I turned around at 30 miles, I would be eating in about 2 hours, and would not ride much more than 60 total miles.    The decision process is always interesting...... 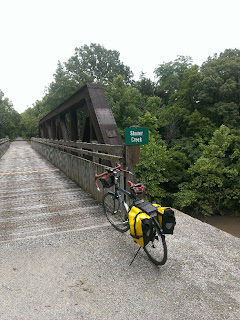 ....and in the decision process, you are always hoping that you will make the right decision..... 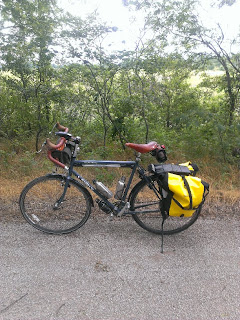 I decided to continue on before turning around ..... only to change my mind after another 1 1/2 miles  after I saw mile marker 222.  A quick calculation showed me I would be short on time if I continued.  So I turned around and headed back.

In the 40s it started to be hard !  Each mile felt like it was uphill. Going uphill was slow.  Going down, really fast.   When in the slow speed mode, the feeling was more depressing... and things seemed to hurt with every push of the pedals.  Downhill was better, a bit of a euphoric feeling.  Even when the ups and the downs are the same in miles, you spend more time pedaling up the hills.   And not being in the right frame of mind and hungry, it was a slow struggle.  (and in reality, it WAS uphill !)

I needed a boost !

I found my boost in the way of a cheeseburger in the early 50s of mileage.   A great place and nice people.

now feeling refreshed, the riding to 60 went by fast and it was enjoyable.   It is amazing what a bit of a rest and a cheeseburger will do for your energy... and ease of riding. 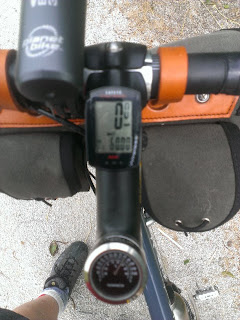 It was exciting approaching the 60 mark.  I saw a turtle crossing the rode and I usually stop to take a picture and move them off the trail for their safety, but instead I told him to just carry on, As with life, as you get older maybe it is best not to interfere. Anyway, I was on a mission!

I rode past a wounded bird that was walking down the trail and it was struggling to get out of the way,... and as I rode past the wounded bird, I wished it luck,  as there was not much else that I could have done anyway.

At 58 miles, a stick went into the front wheel, then came out and I noticed that the speedometer/odometer had stopped.  "NO .. Not NOW"      I yelled out to nobody .....    I stopped and I was able to adjust the attachment and things started working fine once again. Oh the little things that make you panic. 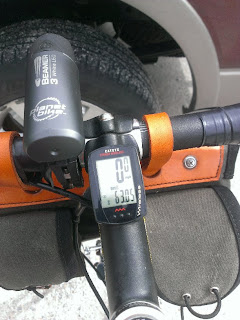 
Riding and Life are good !

Overall, it was a great ride on my Surly Long Haul Trucker.  I averaged about 11 miles an hour... not fast but enjoyable and on the wet road surface not too bad.  The Surly LHT is not fast, but very comfortable  I have about 10,000 miles on in since buying it almost 4 years ago. Just a great bicycle for me.   .

My Salsa Fargo may have been a better choice for the ride with the conditions.   I could have used fatter more aggressive tires with the condition of the trail surface.   But I wanted to do this ride on the Surly LHT.